I finally did it. I managed to successfully cook Swiss chard as a side dish — not as a dessert!

I followed this Food Network recipe for Sautéed Swiss Chard, but used about half of the melted butter. (I didn’t drag out the scale, but I probably had about half the Swiss chard, too.) It was delicious, and super easy to make.

As I always am when sautéing greens, I was amazed at how little there was when I emptied the pot. Thankfully, I’d suspected that Swiss chard would be too kale-like for Mike’s liking, so also steamed some broccoli for him. But really, I couldn’t have been happier to have it all to myself. 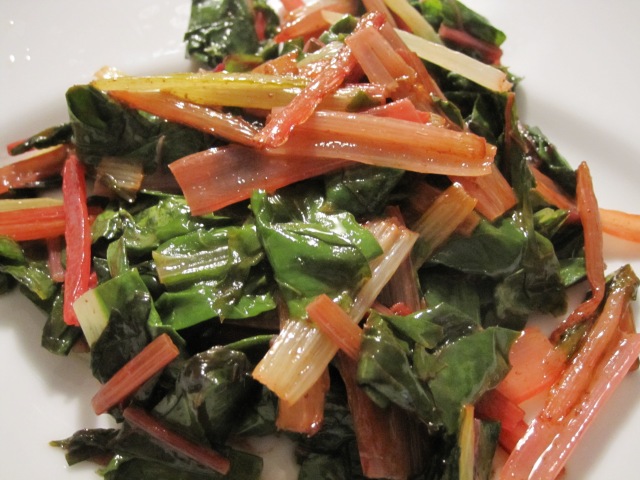 But until last summer, my rhubarb experience was limited to only store-bought jam. I’d never cooked with it. So when our farm promised rhubarb in a weekly CSA box, I was excited.

“Rhubarb” in hand, I looked it up in the Food Lover’s Companion, my go-to guide for vegetables unknown to me. Don’t eat the leaves — they’re poisonous, it said. It’s all leaves, I thought, but … OK. After I trimmed the leaves, I was left with the tiniest red stalks, hardly enough for the recipe of rhubarb crisp I’d found. Still, they went into the pot with a lot of sugar. (Thank God.)

The finished product, with its oatmeal, cinnamon and brown sugar topping, was so pretty that I took it to my newish in-laws’ house. I’ll admit it, I was damn proud.

Until a couple of weeks later, when I was wandering through the farmer’s market and saw some “rhubarb” at a stand. Only the sign above it read “Swiss chard.”

Just so you don’t make the same mistake I did, this is Swiss chard. (Which, as it turns out, will work in a “rhubarb” crisp in a pinch — if the recipe calls for enough sugar.) 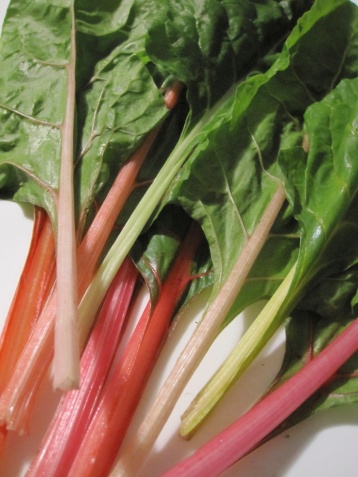