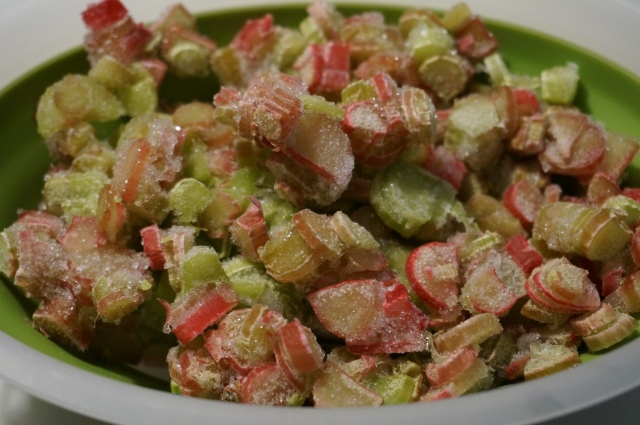 When I froze rhubarb last summer, I had no idea how happy I’d be to find it in the freezer during the winter that refuses to end.

I had smartly cleaned and chopped the rhubarb, then portioned it into two plastic bags. If only I’d written the amounts on each bag. I vaguely remember thinking I would remember. Of course, I didn’t. Lesson learned.

I thawed the rhubarb on the counter — in a color-coordinated rubber colander — for a couple of hours while I figured out what to do with it. Since we’ve been eating healthier over here, a sugary crisp was (unfortunately) out of the question. But muffins are, to me, always justifiable “junk,” especially if they’re topping-less. (Topping equals cupcake, in my book.) 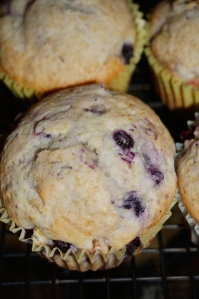 A quick search revealed this recipe for rhubarb blueberry muffins. Jackpot! I was intrigued that sour cream was on the ingredient list, I had frozen blueberries in the freezer that I’d bought but never used for smoothies, and I knew there was at least a cup of rhubarb.

(As it turns out, I had a cup and half of rhubarb, which explains why I used two bags. I tossed it all in. No harm, no foul.)

The muffins were moist and flavorful, and the recipe easily yielded 18 instead of an even dozen. When I have more rhubarb, I’ll make them again.

Now, what to do with that frozen okra …