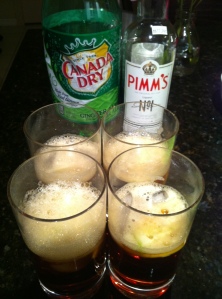 What happens when two people in one book club love the same British liquor only prepared differently?

Why they have a Pimm’s off, of course.

I’ve written about Pimm’s before, the quintessential summer English drink I fell in love with during a summer in London. I’ve long prepared it the way pubs there serve a Pimm’s cup (or a jug of Pimm’s, with friends): with lemonade, strawberries, cucumbers and mint.

But book club Jen takes a much simpler — perhaps, Americanized — approach: with ginger ale and lemonade.

We tried my version first. “You win,” Jen quickly declared.

Really, is there a wrong way to drink Pimm’s on a summer’s night? Personally, I think not, especially when it’s paired with good friends and a good book.